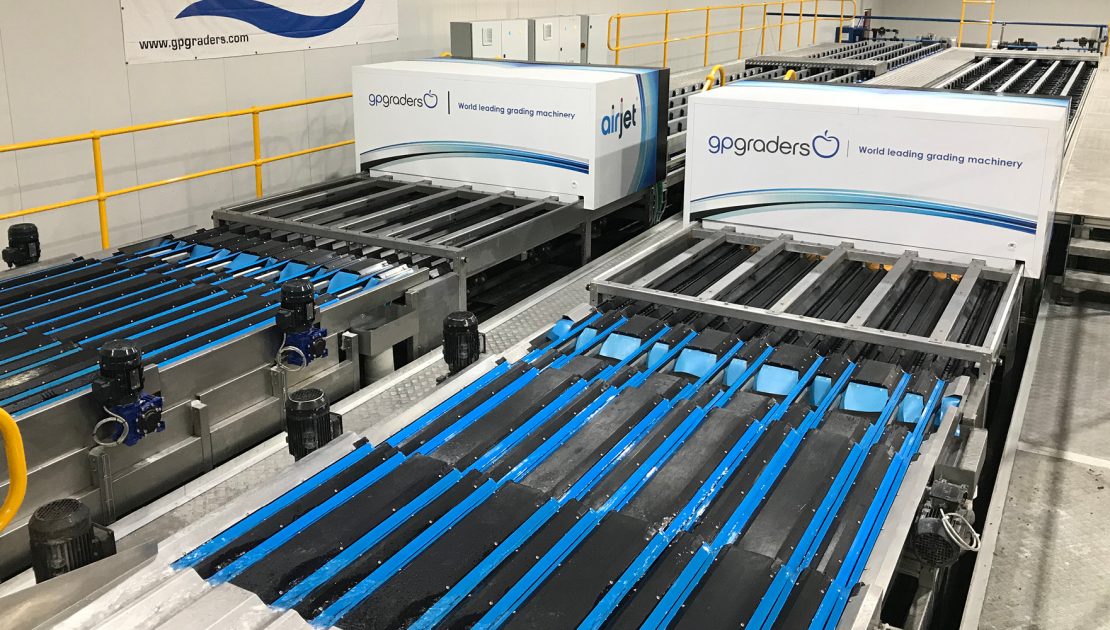 The capabilities of grading equipment have advanced considerably since GP Graders entered the sector in the early 1960s. Can you briefly detail this evolution through the eyes of your company?

Stuart Payne: For cherries, we started out manufacturing mechanical grading machinery, which was the industry standard until the early 2000s. We were primarily supplying the Australian market, but we made a machine that was fit for export. We began getting some interest from overseas cherry packers, particularly from Italy, and began sending machines over there in a the every late 1990s, and that carried forward. We built markets in Chile, Turkey, Greece, Europe and the US, all with our mechanical equipment.

In December 2011, we introduced defect grading electronically. I’m proud to say we were the first to do so and it was an immediate success.

SP: We’re still doing a lot [of cherry graders] but we’ve continued to branch out into other products as well.

We’re getting some traction in loose grapes, cherry and grape tomatoes, and we see blueberries as a great opportunity going forward. That small, fresh produce category is where we see our niche with our trademarked AirJet grading platform, which provides an alternative to traditional cup graders.

We want to introduce our trademarked AirJet Vision technology to some of these new categories that otherwise haven’t seen this sort of technology.

Can you outline the advantages of your trademarked AirJet platform?

SP: It really depends on the produce. For something like blueberries, we’re the only ones who can see shrivelled and dehydrated fruit, and separate relative degrees of softness to firmness.

The design of the machinery has been made according to very strict hygienic standards. Our view is that fresh produce grading machinery really should be compliant with the same hygiene standards as food processing machinery. Everything can be washed down, it’s easy to clean and easy to access; we’re really catering to what we think will be a future need in hygienic machinery.

GP Graders’ AirJet grader is powered by your trademarked AirJet Vision software. I understand this marks your entry into the development of software. Why have you gone down this route?

SP: We’ve developed the AirJet Vision software over the past three years. It’s been developed for both blueberries and cherries an we’re running it on loose grapes and cherry tomatoes.

We launched it mid-last year (2018) and to this point it’s fault free. In fact, it’s performing well beyond our expectations. It does everything we want it to do, and it gives control over the whole development pipeline. We’ve got plenty more innovations we want to launch in this space, so it’s just a matter of ticking those off as we free up development time.

Can you elaborate on what some of these innovations might be?

The most exciting thing for us is where we’re going with the AirJet Vision software. Our customers’ feedback has been excellent, and we’re working to really broaden that range into different commodities. We’re working with different partners to achieve these ends.

Having our own software means we can drive this development. We’re not constrained anymore, and we’ve got a really positive future in this space. It’s the best move that we’ve made.

One of the partners you’re working with is US-headquartered A&B Packaging, a company GP Graders signed a collaborative agreement with earlier this year. What will this agreement cover and what value will it deliver?

SP: A&B Packaging is a leader in technology for the packing and handling of blueberries. They also do a lot in cherry tomatoes. They’re a great family-run company based in Michigan. We complement A&B’s range of equipment in the sense that we can provide them with an electronic grader. They’ll provide all of the infeed and automated packing and we can marry that up with our trademarked AirJet system to provide and end-to-end turnkey solution.

It’s a partnership; they’re going to sell our machines for blueberries globally. They’ve got the skillset in that space and they’ve got the global customer base to tap into.

Presumably, a globalising business presents the need to provide an after-market service to a more global customer base. How are you managing this?

SP: We’re really only interested in selling into a market where we’re able to provide that follow-up service.

Customers would once base their decision70 per cent on the product and 30 per cent on the after-market service. I think that’s completely flip-sided now, with customers just as much, if not more, concerned with the level of service.

We spend a lot of time developing a service programme for our clients, including pre-season maintenance before the machinery begins operation, fully catered stock of parts in our warehouses for customers, 24/7 technical support throughout the season and a post-season maintenance programme. We can also provide contract operators for our customers throughout the season to run the machines (if they require).

It’s intense but that’s the expectation of the customer because the downtime cost of this machinery in a really intensive season is too much to cover.

A note to finish off on is the so called ‚’automation equation’. Are packers beginning to better understand the value that can be derived from a significant upfront investment in grading equipment?

SP: It’s purely a numbers game. You don’t invest in million-dollar equipment if there’s not a very swift return on it. That return equation is coming down to anything as soon as two or three years.

I guess we attack both ends of the spectrum on the profit sheet. We attack the cost base with reduced and minimalised labour, and we attack the revenue end of the profit and loss statement by increasing the average price of the produce through segmentation. We are able to help the packer carve out that lower grade product but get the highest price for it. Now you can separate a crop into a third grade product, a second grade product, a first grade domestic product and a first grade premium export product. This lifts the average price return across the board, rather than just having a mixed bag of reasonable product.

Overall, the profit outcome of the installation is very good and very swift, and everybody recognises that.